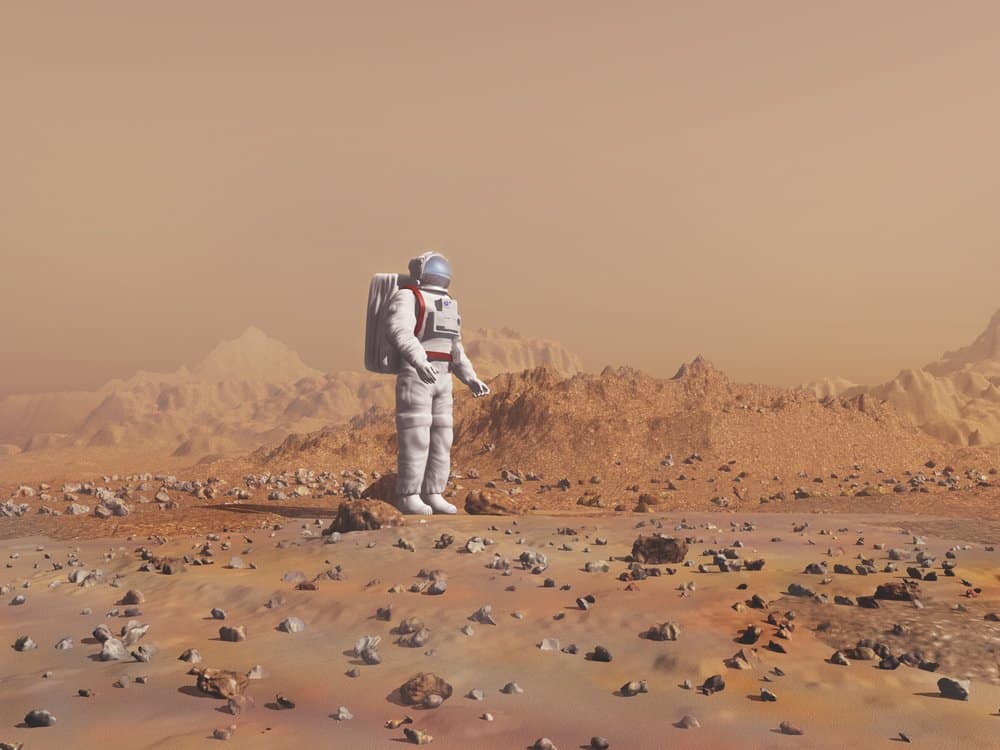 My alarm clock is relentlessly beeping me out of a deep slumber. I was dreaming of blue oceans, which I have not smelled for quite a long time. I miss it. I force the thought out of my mind, focus on my long “to-do” list and get ready for work. The sun is already up and outside my double pressurized window, I see an unforgiving barren frozen landscape of red sand. The year is 2025 and I work for Mars One, a Dutch organization, which established a colony on Mars.

I was one of 200,000 candidates that applied for this job in 2014. The job description stated that I was to be part of a double man/woman team who would travel to Mars on a one-way trip in order to establish a colony. The selection procedure was grueling but I made it. I felt special, lucky and so much better than the rest of the world. Now, after a few long years on Mars, I am ready for a career change but kind of stuck, right? I went over my contract details and the one-way ticket part is pretty solid and so are my pension benefits. The latter worries me most because a pension on Mars is quite different than a pension catered to life on Earth and I am not talking about the cost of living.

You see, time is relative in many ways. You already know this. Nine hours on a transatlantic flight in coach feel different than nine hours at a sunny vacation spot with many new impressions to process. Just in 1907, Albert Einstein went a “little” further and established a theory that time in space is dependent on acceleration and gravity. It was only in the 1960s that scientists were able to test part of this theory by comparing two atomic clocks, one on the ground and one on top of a clock tower. The one on the ground indeed ticked slower because of a higher gravity force. So here is my problem: gravity on Mars is only 10% of Earth’s gravity. So, I am aging faster on Mars compared to Earth but my pension is accumulating on slower Earth time. I am very worried there will be a large black hole in my pension benefits.

On earth we are dealing with expected pension deficits by increasing the retirement age. However, this action is mitigated by our increased longevity. So now pension funds are trying to heighten their performance targets by increasingly investing in riskier assets. To make matters worse, we feel time is going faster and faster due to quicker changes around us: in 1920 the average time of a company in the S&P 500 index was 75 years, now it is closer to 15 years. This makes a “buy and hold” strategy questionable as time goes on. There seems to be one absolute measure of time for everybody regardless of where they are in the universe and that is the speed of light. This is very near the speed of flash trading and current electronic trading via fiber optic cables that dominate the last hour of trading each day. It is also very near the expectations of investors, demanding performance for their investments.

Do you know it takes six to eight months to travel from Earth to Mars? In comparison, this makes the nine-hour flight feel like a local bus trip. Time is relative and it changes profoundly with aging. Be patient and don’t expect or push to have things done at the speed of light because time has its own way of passing. Define your environment and choose the right investment horizon. Companies come and go at greater speeds but it does not mean your pension benefits will be covered quicker. This is true whether you work on Earth or on Mars. Call us for all your interstellar pension advice before you pack up and leave for an even faster paced world.