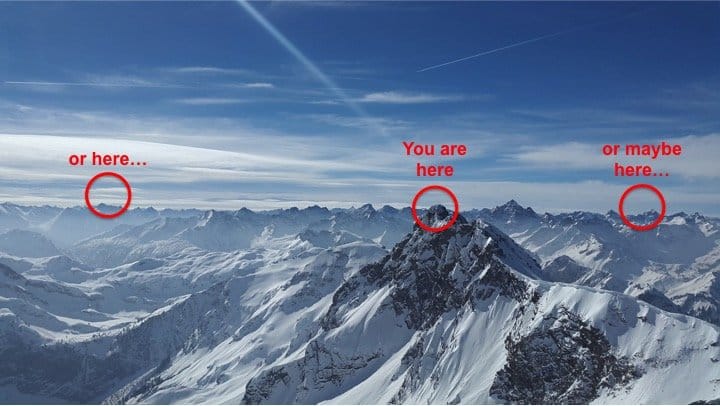 “A group of soldiers set out on a long navigation exercise in the Alps. The weather was severe and they got lost. After several days, with their desperation mounting, one of the men suddenly realized he had a map. They followed the map and managed to reach a town. When they returned to base and their commanding officer asked how they had made their way back, they replied, ‘We suddenly found a map.’

The officer looked at the map and said, ‘You found a map, all right, but it’s not of the Alps, it’s of the Pyrenees.’” (Irrational everything, Guy Rolnik). This is the story, which Daniel Kahneman, our favorite behavioral psychology professor, recalls when asked about Economic Models and people’s irrational behaviors.

i-Cthru’s consolidated time-weighted return for 2017 was +27.03% in USD. This result is unleveraged, net of all trading costs, fees, dividend tax withholding for non-US clients and cost of protection of individual portfolio holdings.

2017 was kind to those who disregarded all the negative news and dire predictions for the stock market at the beginning of the year, during the year and towards its end. Those with detailed maps from expert strategists that showed the way forward adjusted their predictions, had to switch maps or became lost. Low volatility during the year also helped by providing us with relatively cheap cost of asset protection.

We were lucky to be swimming along with a strong current and to even paddle a bit faster than the rest. However, we always look odd in the water because we swim with our helmets on. We like to be prepared just in case we encounter an uncharted waterfall.

While the words “economic recovery” were used in abundance during 2017, many strategists and journalists overlooked the extraordinary earning-power and monopolistic tendencies of the world’s leading technology companies pulling the overall markets up. This, combined with an expected substantial tax cut for C-corporations in the US, proved to be the real story of the year. A real boom in earnings and near-full employment are today’s facts. We are not recovering anymore. We are going full steam ahead.

Somewhat similarly to the dominance of the current big technology companies dominating the US exchanges, there was a time in history where 50 companies (Nifty Fifty) dominated the stock exchanges for a decade during the 60’s and there was a time where only one company dominated the Dutch stock exchange for almost 200 years. It was the first company to issue shares, establishing limited liability for shareholders in 1602. It was the VOC, a trading company listed in Amsterdam. The VOC was granted a 21-year monopoly on the Dutch spice trade in Asia and had its origins in financing single ship-voyages, which, if they returned safely, generated 400% net investment returns. In order to scale these ventures over multiple ships and reduce risk, voyages were pooled into one company, the VOC. At the height of its tenure it had 5,000 sailing vessels and employed more than 70,000 people. VOC’s dividend payments averaged an incredible 18% per year over the course of the company’s 200-year existence, while the yield on a Dutch government bond averaged 5%.

The VOC survived several wars, but its final demise was the use of excessive debt and it was ultimately folded into the British East India Company. The board of the VOC could never have foreseen the course of the Anglo-Dutch and Napoleon wars and their devastating effects. By a long shot, VOC was the largest company in terms of value and power to have ever existed, but in the end it was not enough to dictate its future…

So, things come and go. Time and space are relative. History repeats itself. Monopolies are built and broken. Bull and Bear markets are linked together like Yin and Yang with time as the pair’s only variable.

Successful investors have to time the market, own better performing companies than the market and/or have a better portfolio construction. It sounds simple but is very hard to achieve. Even when they are in possession of all these skills, only opportunities can demonstrate possession of these skills and how they are being used.

Most successful investors operate either on very short time horizons or very long ones. The ones with the very short time horizons are focused on small discrepancies in the market. Their teams analyze millions of signals and run tests to see if there is a causal relationship between them, for example analyzing trading flows in microseconds or testing algorithms looking into rainy days in Paris having an influence on negative New York opening prices. The latter was tested and used by Renaissance Capital, an incredibly successful hedge fund using many unrelated bets, ran by Jim Simons. Jim thinks that forecasting more than a few days out does not make any sense; there are simply too many variables and unknowns.

At the long-term end of the time-axis, sits Warren Buffett. His optimistic long-term views disregard all short-term (mostly negative) noises. Mind you, he counts short-term in years not in microseconds. His only prediction is that the market will go up over time. He would have loved to invest in the VOC if he had been alive in the 1600’s.

There is one thing all successful investors have in common: they switch gears fast when the markets go through an upheaval. The short-term players turn their books on a dime and short the market and Warren deploys his cash pile to buy more of what he already owns at lower prices. Cash is an option to buy at lower levels.

At i-Cthru, we have adopted elements of both long and short term in our investment strategy. Like the Romans and the VOC, we constructed our strategy to last and have built in many redundancies of margins of safety and elements of protection in order to survive the unknown risks. This is also how the VOC sailed into unchartered waters and found new places to set up new trading posts. It is far more preferable than operating with the wrong map giving you the illusion of precisely knowing where you are.

Just shy of 300 years after the Tulip mania pushed the VOC to its highest valuation ever, we are confronted with many questions about Bitcoin. The temptation to jump into the fray is high; so much value made out of seemingly nothing is a dream come true, right?

Well not so fast. You might just own a virtual tulip with a short life span. Don’t get me wrong, we love the theory and technology behind the Blockchain and a 1000% rise in value matches that of the VOC albeit a lot faster. We’d love for something to break up banks’ infuriatingly high fees. However, we also understand a few things about people’s temptations which Daniel Kahneman describes so well in his books: the temptation to create more Bitcoins or other ICO’s is simply too high; the temptation of governments to regulate cryptocurrencies is also high as is the temptation to misuse this technology for dark intentions. Caveat Emptor!

If you are not a trader you can earn Bitcoins by mining them. The one that solves the crypto puzzle first gets paid, so speed and computational power are key. I am sure you are aware it takes a lot of energy to mine these encryptions. Only companies with significant computer power can win the race to solve encryptions in order to match a transaction. Hackers, who use other computers’ CPU power to mine cryptocurrencies, are showing up everywhere. It saves them most of the costs. Maybe that is the reason why your computer has already been slowing down…

It is, in our humble opinion, much more useful and profitable to look for the next VOC. A good place to start would be the stable of 57 new Unicorns in 2017. Most of the new unicorns are located in the USA and China. China’s largest new Unicorn “Toutiao”, a news aggregator, is valued at a cool USD 20 billion! There are some really interesting companies, especially the ones focused on health related issues and artificial intelligence. As these companies grow older, their chance of becoming significant players increases every year, while at the same time becoming more robust. This is something, we very much like at i-Cthru: we hope to invest in some of these companies in the next decades. All the rest is just hubris on a wrong map.